Located at a distance of nearly 400 kilometres from the national capital, the city of Hanumangarh in northern Rajasthan is the administrative headquarter of the Hanumangarh district. The city is located on the banks of River Ghaggar, and was once known by the name of ‘Bhatner’ was being a centre of power of the Bhati Rajputs who ruled certain parts of the country in the 17th and 18th centuries.

Important Places to Visit in Hanumangarh 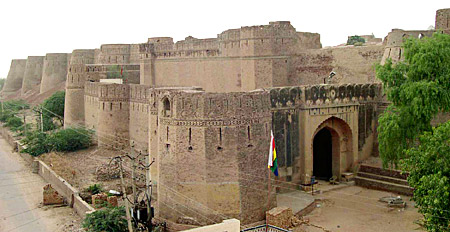 Bhatner Fort
Generally considered to be the central attraction in the city of the Hanumangarh, the Bhatner Fort (also known as the Hanumangarh Fort) is located on the banks of the River Ghaggar, at a distance of roughly 5 kilometers from the Hanumangarh Railway Station. Considered to be among the oldest forts still existent in India, Bhatner Fort has found mention in the autobiographies of Timur and Akbar. Myths associated with the Bhati Rajputs who ruled this region state that this fort was instrumental in helping Indian rulers keep Central Asian invaders at bay for a very long time. The inner sanctums of the temple are embellished with small temples which are dedicated to Lord Shiva and Lord Hanuman.
Shri Gogaji Temple
Gugga Jahar Peer, better known as Shri Gogaji, presides over this holy temple which is located at a distance of 120 kilometres from the centre of Hanumangarh. Historical tales mention that Shri Gogaji was a valiant Rajput warrior, belonging to the Chauhan clan, who possessed spiritual powers. The temple is believed to have been built more than 900 years ago and that it was reconstructed in 1911 by Maharaja Ganga Singh of Bikaner.  A statue of Shri Gogaji is present inside the temple, along with a number of other artifacts which reflect the presence of both Hindu and Muslim influence on the architecture of the temple.

Brahmani Mata Temple
Located on the Hanumangarh - Kishangarh highway, in the Pallu village of Rawatsar Tehsil, at a distance of more than 100 kilometers from the centre of Hanumangarh, this temple has been built on the dilapidated ruins of the ancient Kalloor Fort. The main point of attraction of this temple lies in the annual Brahamani Mata Mela which is organized here during the Navratras.

Kalibangan Archaeological Museum
Considered to be a paradise for those interested in archaeology, this museum is located in the Kalinbangan town which is situated midway between the cities of Hanumangarh and Suratgarh. The establishment of this archaeological museum was done in 1983, with the express purpose of preserving the various excavations that were made from the archaeological site of Kalinbangan town in the period between 1961 and 1969. One is likely to find a vast array of Harappan and Pre-Harappan artifacts present in the galleries of this museum.

Where to stay in Hanumangarh

If you are looking for the best lodging services in the city of Hanumangarh, look no further than the ones mentioned below -

Where to Eat in Hanumangarh

How to reach Hanumangarh

By Air: Chandigarh Airport serves as the nearest airport for the city of Hanumangarh – the airport is a six hour drive from the centre of the city, and a number of airlines connect the airport to important Indian cities like New Delhi, Mumbai, Amritsar, Goa, Jaipur, Ahmedabad and Leh.

By Rail: The city has its own railway station, which is known as the Hanumangarh Railway Station. Several long distance trains, with source stations like New Delhi and Jaipur, halt here.

By Road: Efficient road networks connect Hanumangarh to various Indian cities. The distance between Hanumangarh and some of the other important cities are given below –